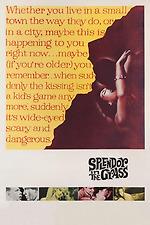 Splendor in the Grass

Made at the perfect time. Five years earlier and it could not have been so frank, suggestive, powerful in its compassion. Seven years later and it would have lost its most powerful tool: restraint. It might still have been an astounding film, but the particular emotional evocation of its central theme -- the inability to find catharsis (personal, familial, romantic, sexual) -- could have been not nearly so apt.

As it is, this is one bold, aching capture of the agonies of adolescence, and more broadly the struggle of coping with what's expected of you. That's beating around the bush, though; 'Splendor' is chiefly about the impossible hypocrisy of the world's attitude toward female sexuality. It centers upon a couple sneaking away to pet and have carefully veiled second-and-third-base liaisons in the 1920s, but that designation almost seems unnecessary. For a film written by a man and directed by another one, this is almost flabbergastingly progressive -- I must confess, I continually expected it to cop out. But all the way through, the problem facing Deenie is the evil of repression: Mom encourages her to hold back till she's ready to marry and then close her eyes and think of England, and she's surrounded by preachers of the gospel of the virgin-whore dichotomy, particularly her boyfriend's father (Pat Hingle), who repeatedly refers to female humans as "it" and "that." Deenie wants desperately to have sex but is told that only "bad" girls do that, and gets dumped by an eager and overly assertive Warren Beatty when she doesn't put out. He goes and has romance-novel sex by a waterfall with a supposedly slutty classmate, so she renovates herself as a seductress -- only to again be rebuffed this time because she's a good girl, and a good girl wouldn't do this.

Natalie Wood has numerous incredible scenes, but the best moment belongs to Barbara Loden as Ginny, sister to Beatty's Bud, a joyously frank and constantly shamed young woman; at an NYE party, she tries to enjoy the moment with her dad only to be shoved away. So she drinks more and begins to rub up against a few men she's had as lovers but they're all "nice guys" so as she points out, they'll only speak to her in the dark. Thus she goes out into the dark. Would a film made today dare to go this far in pointing up the hypocritical American attitude toward women who dare to express desire? Would it so coyly and passionately decry the idea that there are "good" and "bad" girls, and that one wants sex and the other doesn't?

That said, Wood is tremendous -- so much so that while Warren Beatty underplays his part very well, you barely notice him. At every turn, Deenie gets rebuffed: by a clergyman, by her mom when she confides in her, by a shrink just at the moment she seems ready to open up. (The same goes for Beatty's Bud Stamper -- especially significant is the scene in which he basically attempts to ask his doctor about, presumably, contraception and he basically gets giggled at.) The famous bathtub scene, when she throws her mom's obsession with virginity and the idea of being "spoiled" back in her face (and gets set to a mental hospital as a result), is one thing -- drenched with genuine rage -- but I think the poetry reading in class that lends the film its title (shades of 'Margaret'!) defines why this film is so brilliant. There are so many stories being told in Wood's face, in her interaction with the teacher, in her interpretation of the poem, in the presence of her now ex-boyfriend's new FWB in the desk in front of her, in the camerawork and framing -- and all of it unstated, just below the surface, because it has to be... which makes it more throttling. Only the finale, both genuinely sweet and brimming with the forbidden thought of unexplored possibility, generates so many complex emotions.

You can go so far on this without mentioning how brilliantly Kazan directs it. You can have 'On the Waterfront,' 'Streetcar' and 'Gentleman's Agreement' -- none of them are a spot on this. (I'd have to think about whether I prefer it to 'Panic in the Streets.') The camera explores every space and every bit of agonized yearning to be found in the actors and their surroundings. He doesn't have as broad a canvas as Nicholas Ray did in 'Rebel Without a Cause,' but this film is -- whoa, I can't believe I'm saying this -- in that ballpark. It might be termed a companion piece: if 'Rebel' was about the loneliness and trial of being a teenager, this is about the fearsome impossibility of understanding the world of maturity that we all must enter. (And if your state forces abstinence-only education, keep in mind this is pretty much still what you're teaching your kids!)

One last note before closing this too-long reaction: one of the things that makes this enjoyable is that, like Laughton's 'Night of the Hunter,' it teeters on being just this side of campy at several points. All the restraint and aching of it all occasionally just becomes -- without being false or ridiculous -- kind of blackly hilarious. Particularly Pat Hingle's wildly bizarre performance as an oil tycoon. (Hingle was an enormously skilled actor so his over-the-top tone here was very definitely intentional.) Particularly when Beatty puts his arm around Wood, gazing out at the oil rigs, and says "This'll all be ours someday." I like to pretend Kazan was just making fun of 'Giant' by paring it down to about twenty seconds.