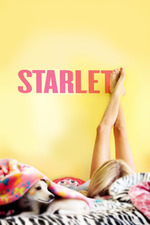 The L.A. colors are relentlessly ugly, the hellscape of bingo nights and garage sales incomparably bleak -- but somehow, everything about Sean Baker's story about weird friendships and unspoken pasts gradually wins you over until it seems to shout out with calm humanism. That's truer of nothing more than the central character of Jane as played by Dree Hemingway, whose sunny demeanor is initially tireless enough that you wonder if you can tolerate her, or if the film is setting us up for a long hit piece on her spirit -- but this uncertainty coalesces into charm, empathy enthusiasm as her sheer pluck becomes clear piece by piece, with tossed-off plot points going together to form a gloriously full picture. It's a remarkable, winning characterization, matched well by the nonprofessional Besedka Johnson in her first and only film role as the cantankerous Sadie; their hard-won relationship is as detailed and believable as if you lived through it, and the catharsis in the closing moments is beautifully handled. One might put forward the argument that Baker lays the surrogacy in their friendship out a little too clearly, but I don't think so -- for one thing, the rhyme that leads into the final revelation (the early throwaway scene that has Jane briefly talking to her mother on the phone) did not register as such until two days after I saw the film, so I think he merits plenty of admiration for nailing a payoff within a limited and subtle emotional range.

The film's also a lot funnier than it seems at first (certainly funnier -- and less stressful -- than Baker's subsequent The Florida Project, an equally warm and kind-spirited story that was almost intolerably harrowing), but its great virtue is what it chooses not to laugh at: Jane, her occupation, her choices. Baker is to be commended for the film's non-judgmental depiction of porn and sex work, portraying a world occupied by a range of every conceivable personality from good and kind to opportunistic and loathsome -- capturing camaraderie among the workers and the benign kindness of, say, a friendly makeup artist or receptionist. Moreover, I was unexpectedly moved by the sequence in which Jane has a quick interaction with a (possibly disabled, but at least very shy) fan at a convention and handles it impeccably; the playing of this as a moment of short but real connection tells us a great deal not just about Jane as a character, but Baker as a writer and filmmaker. The measure of a film's humane spirit is not whether it swells the heart at an obvious crescendo such as the closing moment at the graveyard, but whether it chooses to bear witness to something like a basically absurd moment of a fan talking to a porn star and elects to treat the moment with respect rather than mockery. That same permeating decency informs the entire film; it is a Melvin and Howard for the Instragam age, and not because of the age gap in the friendship at its center.