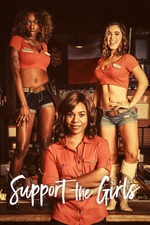 For the first hour, this subtly pro-worker slice of life about the comings and goings among the young female staff at a sports bar and their long-suffering, kind-hearted manager (Regina Hall in a flawlessly judged, sensitive performance) is an absolute dream of natural, believable energy and understated emotional complexity. It doesn't go off the rails after Lisa gets fired by the loose cannon of a small business owner that signs her paychecks (James Le Gros), and in fact Bujalski stages the "drama" that unfolds afterward at the restaurant with the believable shapelessness that might transpire rather than some violent explosion; the best scene in the film, the confrontation over the money, also happens afterward. But things sour a bit at the epilogue that has the major characters interviewing for new but similar jobs; if Bujalski was going to go for grandeur at that point, I'd rather he have shot for the poignant sense of loss that hangs over House of Pleasures than the hacky Garden State-like conclusion that has the three screaming into the void. The dialogue never flags, nor does the actors' reading of it, and it does get eloquently at the ruthless wheel-spinning, futility and exploitation at the center of life under capitalism, but somehow its departure feels too abrupt to suggest the kind of meaning that its characterizations deserve. The abandonment of the single-day structure really hurts, I think, and the film sacrifices some of its poetry and eccentricity in the process.

Wouldn't mind if Bujalski tried making a movie with this terrific cast that was as formally audacious as Computer Chess.