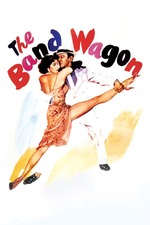 It sounds like an unassailable proposition: Fred Astaire in color hobnobbing with the Freed unit in the role of a washed-up song & dance man who gets shoehorned into a pretentious playright's overwrought Faust revival. But sadly this didn't do much for me; the comedy seemed flat despite winning performances all around, and the story -- to whatever extent that matters -- never seemed to actually start. However, obviously "Dancing in the Dark" is immediately one of the most shatteringly beautiful things I've ever seen on film, with Astaire and Cyd Charisse subsuming themselves completely to the purest possible expression of romantic longing; it's obviously a quintessential moment of Hollywood mythmaking at its peak, is perhaps Astaire's finest single performance, and renders the entire film automatically indispensable. "By Myself" and the climactic Mickey Spillane ballet are delightful as well (the latter an obvious influence on Stanley Donen's eventual Moonlighting scene). The other numbers are major steps downward from those, especially "Triplets," which I found deeply unnerving. Unlike the better Minnelli musicals and of course the RKO Astaire-Rogers affairs, there's no sense of anything genuinely stringing it all together even abstractly, and the florid production design, brilliant as it is, removes some of the scrappy appeal that might have strengthened it as a comedy. But perhaps I was just tired; I did laugh at the bits and pieces of Jack Buchanan's outrageous explication of his concept for the play at a party, seen through various doors opened and quickly shut by other characters.

The Barretts of Wimpole Street