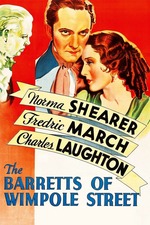 The Barretts of Wimpole Street

Ostensibly the story of Robert Browning's courtship of the largely bedridden Elizabeth Barrett, but really -- with Fredric March's Browning just bouncing in and out of the room like an oblivious puppy -- a portrait of an abusive home led by patriarch Edward Barrett, indelibly and harrowingly drawn by Charles Laughton, whose performance is a counterintuitive treat in that it's quite fun to watch him embody such a loathsome character even as his behavior, schlocky as it can sometimes feel, is all too clearly born of someone's keen observation of narcissistic behavior. That's what makes the film rather gripping and valuable today, especially since it never tempers its unsparing attitude toward the possessive, toxic, almost incestuous behavior of the character with any sort of sentimental claptrap about family; this resonates more than the romance, more than the MGM opulence (the costumes by Adrian are magnificent and outrageous) and more than the other performances. (I normally like Norma Shearer but she's basically drowned out here.) Laughton's final scenes are impressively uncompromised, though the ultimate stroke of madness is left to the imagination. Kind of a proto-Heiress, almost.