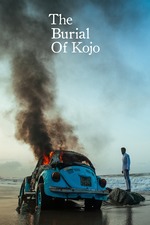 The Burial of Kojo

Maybe not without its merits as a magical-realist story (birds, upside down people, mystics, and yes, a live “burial”) with the feel of folklore, but so formally obnoxious it doesn’t matter. No disrespect intended but this plainly trusts neither its script nor its audience, unnecessarily underlining every moment with excess camera and editing trickery (slow motion, low frame rates, discoloration, corny visual effects, out-of-time dream shots, excessively jumpy handheld, nonsensical movements of the camera, etc.) that just looks amateurish and not in the charming manner of actual outsider cinema but more along the lines of a first-year film student who’s excited about the medium but hasn’t yet determined the need in narrative films for some sort of basis to this kind of visual hyperactivity. But really, one problem is that there’s so little here that it almost had to be excessively adorned to make it to the 80-minute mark; I actually groaned when the framing device was revealed at the end. Like I said, respect to anyone who gets a movie made on such a scant budget in a difficult setting, but this utterly failed for me.