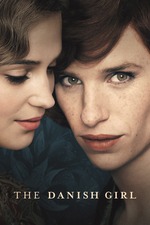 Tom Hooper heard about this really homophobic, deplorably ahistorical, gender and sex-homogenizing movie called The Imitation Game and decided he could make an even more offensive piece of empty Oscar bait that harnessed and violated a real person's life and history -- this time the victim (and that's very much the way the film processes and understands this person, and LGBT people as a group) is Lili Elbe, Danish transgender artist, portrayed by Eddie Redmayne with astonishing incompetence that must be seen to be believed -- for award-mongering Hollywood prestige, hitting all the pre-cise-ly sanc-ti-oned biopic grace notes (the scarf, flying off in the wind at the end, represents Freedom). This is the most outrageously smug slice of faux-intellectual revisionism and phony social consciousness since Oliver Stone's JFK. Every interesting thing about Elbe's life and relationship with her wife and longtime partner Gerda Gottlieb (Alicia Vikander, not bad but clearly sleepwalking) is sanded down into nothing to make the events depicted palatable within the worldviews of, well, the people who go and see movies like this. We can't have a movie about the Queers without a scene of one of them (fictitiously) getting beaten to a pulp, after all, and certainly we can't expect Grandma and Grandpa to accept any sort of unorthodox deviation from monogamous normalcy or mild kink in a relationship when they make their trek to see all the year's nominees. Absolutely reprehensible -- an irredeemable, irresponsible, condescending Hallmark card of a film that should be shot into space. It's everything evil about bourgeois conformity and its stranglehold on the depiction of romance, sex, life, reality in modern mainstream cinema.