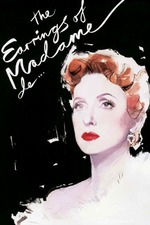 The Earrings of Madame de...

In what must be one of the signature moments of French cinema in the decade before Nouvelle Vague, the great Max Ophüls whips around in a state of unlikely euphoria as bored, debt-ridden aristocrat Danielle Darrieux betrays her husband (henceforth "the General," Charles Boyer) when she falls for the warm, personable Baron Donati (Vittorio De Sica). Right off the bat, this role reversal is a brilliant stunt: Boyer is clearly a more conventionally attractive, enigmatic figure than De Sica, but the film convincingly portrays the former as a petty bore, the latter as shaking the earth that the superficial Madame de... (surname missing) walks on precisely because of the sincerity with which he treats her. The story is tied together with a pair of earrings -- their symmetry mirroring the story's -- that attain considerable import as narrative device, spiritual symbol, fetish object, grave marker. Ophüls' famously magisterial, elegant camera movements are as breathtaking as advertised -- they walk the hallways of refinement but uncover almost overwhelming compassion and emotion, and the performers rise to the task of rendering all of this in real, palpable space, Darrieux's haunted, passionate expresses of love as direct and believable as the pain and disappointment Boyer's General doesn't dare speak aloud. Emotions are brought to life through the almost comical movement between hands of a piece of jewelry, but the enterprise ceases its triviality when it becomes a measure of change in Louise herself; the ravishingly uncontrolled eroticism in the way she reacts when she sees them again could shut anyone up. From start to finish, though, pride and privilege remain the chief obstacles to love and happiness, a beautiful and fatalistic message that refines -- rather than expands upon -- the director's Letter from an Unknown Woman, while outpacing it for frankness and sense of barely concealed sexual abandon.