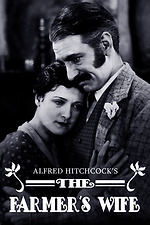 BFI restoration (beautiful, of course). Not Hitchcock's worst film but quite easily his dullest, and it's in fact so boring that it's difficult to believe it's not some sort of a conscious decision. There's an endless number of shots of Jameson Thomas and Lillian Hall-Davis just standing and staring and thinking at astonishing length. Still, as a drama, it's at least credible, and the acting by the two leads is extraordinarily understated and good; the acting is almost always the best feature of Hitchcock's silent films, and this is no exception. But as a comedy, it absolutely flatlines, with awkward, cutesy barnyard business and overexaggerated characterizations among the supporting cast, who play characters with names like "Thirza Tapper." The romantic longing exhibited by Hall-Davis seems to belong in an entirely different film, one that's frankly not so title-heavy and ribald. (Credit where it's due, this overly wordy film does have one of the most memorable dialogue titles in any silent film: "You are the first man who has accepted my sex challenge!") The chief problem is that it's just so repetitive; once the premise is established, it's the same thing over and over again until the very obvious conclusion, but one assumes it had some sort of utility as a crowd-pleaser and novelty at the time. If not for Hitchcock's name it would likely be long forgotten. I do recommend the new Kino Lorber boxed set of his BIP films, however, as they all have something to recommend -- in this case, aside from the acting, there are the lovely, idyllic shots of the English countryside and the rather Sunrise-like set design -- but do reinforce that Hitchcock did not hit his artistic stride in the silent era, for all the promise and innovation (and, especially, capability of directing performers) he was already showing.