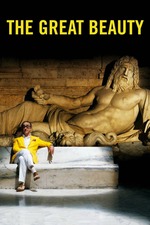 Loud, screaming, flashy and unflaggingly obnoxious modern homage to La Dolce Vita has a journalist and onetime novelist played by Toni Servillo wrestling with the moral quandary of being surrounded by decadence among the Roman jet set, the weight of the city's history and the meaninglessness of this and that within his personal life as well as on a higher level. All the worst tendencies of lifestyle-porn arthouse, geared toward the sort of people who go to the movies to find out where to book their next Hilton excursion; like Fellini, Sorrentino actually loves all the amoral shit he pretends to be decrying, but at least Fellini's qualms went deeper than the superficial emotional battery toyed with here, and at least his love of his country and of hedonism seemed to rely less on granddad fantasies of sex and wealth. Even the love of grotesquerie both men share seems somehow more condescending and blunt-force in Sorrentino's hands. Fellini also didn't seem so impressed with the artistic pretensions of his lead character; as in so many films about Writers, you get the sense we're supposed to think of the profession itself as some sort of sacred ground. It's all just so exhausting, particularly at this length, and has nothing of substance to argue -- the most trite insights in its bad dialogue receive plenty of room to breathe, otherwise it's nonstop busy and frenetic for 140+ minutes, and it looks terrible to boot: just the ugliest kind of advertising-executive color and cinematography all the way through. There are so many endless shots of Toni Servillo's face reacting to bits of chaotic business he encounters with a glum look of combined dread and superiority that it would take a strong soul not to secretly yearn to knock his glasses off and slap him by the end of the film.