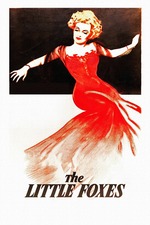 Sparks fly in Lillian Hellman's adaptation of her own play for Goldwyn and RKO, a not-so-covert attack on capitalist cronies and their dependence of cheap labor in the form of a heated-up family drama wherein three money-grubbing siblings take their spouses and children for a ride that leaves moral destruction in its wake. The script doesn't shy away from still-incisive class commentary even if it's unable to give its more underprivileged characters much of a voice, though its sense of irony about even this is palpable. The actors are extremely well-cast, led by Bette Davis as an embodiment of the banal evil of having gold-plated ambitious, Herbert Marshall in probably his best performance as a conscientious banker, Teresa Wright and Patricia Collinge as windows into compassion around all the conniving, and Dan Duryea particularly thrilling as ne'er-do-well, directionless offspring living off old money. There's ample wit and insight here, but quite honestly most of the fun comes out of the squabbling, which gets at a real sense -- even outside of politics -- of how toxic families operate, a point made most succinctly at the outset when we watch Shadow of a Doubt happen in a matter of seconds, as an outwardly genteel setting is subverted instantly by reality. (At the close of action, we can hardly believe we started out watching these same people exchanging pleasantries.) Perhaps this would just be soapy fun with a message, though, if not for William Wyler's usual ingenious blocking and consciousness of seething emotion, and for his resourceful-as-ever use of the great Gregg Toland; the compositions and smartly varied focus techniques make this all the more riveting.

I don't expect classic Hollywood movies to align with my own worldview, but it's a pleasant surprise when one does (constant depiction of subservient black characters notwithstanding).