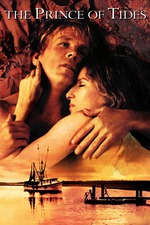 An instructive story about how a stoic, unfeeling, confused man's life can be changed by opening up to a therapist, especially if she's hot and has sex with him.

Have to admit, when I sat down for this onetime cultural touchstone and Oscar-bait blind spot I was preparing myself for a prestige-picture nightmare and certainly didn't expect anything half as weird as what I got. Let me be clear: it's pretty much objectively shitty -- the performances are terrible, the rhythm and placing are rough-hewn and the story is so completely goddamn insane and illogical it feels like you're making your way through an unusually ridiculous Choose Your Own Adventure book. Taken from a soapy Pat Conroy novel, the story is almost impossible to summarize, but essentially it's about a pending-divorced dad (conspicuously high Nick Nolte) consoling his sister after a suicide attempt and getting involved with her therapist, first as a football coach to her surly teenager (?!?) then as a (very) temporary romantic partner after he opens up about a trauma in his and his siblings' past. Said trauma is so wildly over the top that, despite being quite horrific in theory, it comes across as so ludicrously hokey it just adds to the sensation that we're watching a vanity project that's pitched so poorly it's kind of charming, at least more so than the insidiously witless Dances with Wolves from a year earlier. Each sequence barely follows the last, and the character arcs and emotional beats are so rote and rushed it feels like skimming a bad romance novel, which (as far as I can tell) is essentially what it is. I have a hard time understanding why this was ever praised as some sort of heroic artistic gesture by so many storied film critics of the time, but I did have kind of a blast watching it. Fave line: "I don't give a shit about the Big Dipper! I care about us!"

Edit: I totally forgot to mention all the bizarre and hysterical asshole concert violinist stuff which just goes to show, this picture contains multitudes! It’s like Mysteries of Lisbon!!