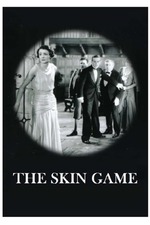 Functional stage adaptation from Hitchcock, sort of along the lines of his version of Juno and the Paycock in that he ends up without much to do besides photograph the players, but there's a little more visual imagination in play here -- a few exquisite tracking shots and surprisingly long unbroken dialogue takes, plus a rather frantic auction scene -- and Galsworthy's characters and scenario are compelling enough to make the film quite entertaining, though like most of Hitchcock's early talkies it's in pretty rough condition. (This is also his only film that really suffers from the stilted manner of so many sound films from 1929-31 or so; Murder!, his previous movie, looks so much slicker and doesn't have the awkward jump cuts that dominate the first act here.) Like Juno, The Skin Game ends with a metaphor -- a burned-out candle there, a falling tree here -- to rather grim effect. If the films and his approach to them tell us anything about Hitchcock (if I'm not mistaken, he was assigned by John Maxwell to direct this one while Juno was his own choice) it's maybe that his feelings about class conflict and family life bordered on nihilism, or perhaps there just aren't many touchstone British dramas that display much faith in humanity. Anyway, slight upgrade; the new Kino blu is decent and I always find myself enjoying the film despite its lowly reputation. Hitchcock's early talkie period is broadly rife with underrated pictures; even Waltzes from Vienna is better than you've been told.