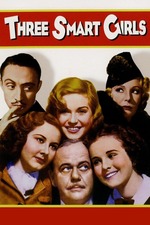 Dreadfully thin comedy opens with several interminable minutes of Universal's proud "new discovery" Deanna Durbin singing opera on a sailboat; the film switches with irksome listlessness between closeups of her gazing vacantly into the distance, bemused reaction shots of the other two "smart girls" (Barbara Read and Nan Grey) and far angles of the boat itself, then goes through the cycle again, like some hellish micro-parody of Das Boot. Then we learn that the impetus of the story is that the trio, now living in Switzerland, want to go to NYC to visit their uncaring, aloof father who divorced their mom a decade ago, determined to Parent Trap him back into their young adult lives as he stands on the cusp of marrying a gold-digging opportunist. The strangest thing about all this is that their mom still keeps paintings of her ex-husband all over the house and cries about him routinely, or maybe it's that Dad has to be reminded that his daughters exist and of what their names are, and yet we're supposed to root for his reunion with his estranged family. There's one decent joke in the entire film, mere seconds before it ends, and the rest is a parade of high-pitched whining with periodic stabs of random opera, smug schmoozing around by the likes of Ray Milland and John King, who are frankly almost impossible to tell apart, casually toxic behavior by nearly everyone, and the weakest and most ineffectual kind of farcical "business" filling the time between awkward crises. Even if you don't respect the Oscars that much it's still weird that this was a Best Picture nominee; considering this in the same breath with Dodsworth and Libeled Lady and San Francisco and Mr. Deeds Goes to Town (which I don't even like all that much), to name a few, is really incomprehensible, and I suspect it's not just because of the passing of time.