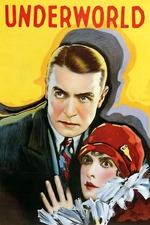 One of the most aesthetically gorgeous of all crime dramas. Von Sternberg harnesses the skeleton of Hecht's story for a violent psychodrama in which the violence feels completely incidental, subsumed by his own interests in the complicated intersections of friendship and romance, loyalty and self-preservation. And he may be even more infatuated with the setting, captured impeccably, than he is with the people; that doesn't mean the story isn't deeply compelling, and there's so much palpable weight to the relationships. The performances are magnificent, the process work and editing singularly eerie.

Criterion's 3 Silent Classics by Josef von Sternberg came in the mail today and I may be unreachable for the rest of the week.