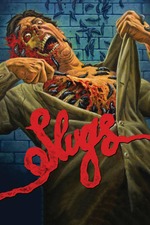 From the director of Pieces comes a creature feature that matches if not tops that masterpiece in terms of both gore and absurdity, this one exceeding in silliness not just by execution but premise and just about every story detail contained within. One can't help but question exactly how much of J.P Simon's minor subversion/deviations of the suburban horror tropes of the time were conscious and how much was accidental, as the finished product oozes the feeling of both, though maybe it's a moot point as either way it's brilliant. What I found particularly interesting was the way the story largely veered away from the moralist coda of its protagonists action and eventual fates and instead focused on a weird sense of civic duty (the heroes of the story are literally sanitation engineers, city employees, and high school teachers all trying to just do the right thing). It's an especially weird idea to explore in a town THIS FUCKING SCUZZY and gross looking, but I was delighted to go along with it. Of course narrative deconstruction is besides the point and what we really came for is killer slugs, and in this regard THE GOODS ARE MOST CERTAINLY BROUGHT. Despite the initially limited seeming range of the monsters in this (just a bunch of gross looking but kind of banal black slugs on the ground) the deaths in this are wildly creative and shocking even by todays standards. Blood and viscera doesn't so much flow as explode in moments of unhinged violence. Nude teenagers are devoured alive, business spontaneously combust during dinner, it's all incredibly satisfying.

A must watch for any 80s horror enthusiast (probably my favorite category of movie ever), Slugs does not disappoint.