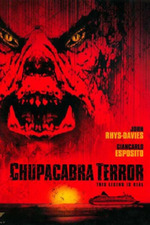 The best way to describe Chupacabra Terror is it's a film. There's nothing really wrong with being just a film, but there's not a ton right with it either.

John Rhys-Davies is a bunch of fun, and I actually really like the chupacabra costume. Overall, the acting is mostly fine, which is a good plus if the movie isn't going for straight cheese. The blood and gore effects are about what you'd expect from a low-budget, circa-2005 film, but that certainly doesn't get in the way of the general enjoyment.

I don't think the doctor, played by Giancarlo Esposito, is written all that well, and there are some inconsistencies surrounding his actions. There's also something off about Chelan Simmons' Jenny character. I'm not sure if it's acting, writing, or some mix. There are also a few weird bits as to how the chupacabra is handled in general. There are some intentional morons on the ship, which function as one-note plot devices, and I'm not sure they're needed.

All in all, it's a standard made-for-TV movie; it will entertain well enough, but don't go in expecting something incredible.