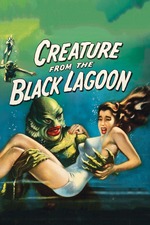 Creature from the Black Lagoon is a fairly straight-forward horror film, but even sixty-five years later, it still works.

The movie plays on the fear of the unknown creature. Deep in the Amazon Rainforest, there might be some kind of ancient, half-fish-half-man horror that sets out to kill all humans who come into its territory. Maybe it even wants to steal away the women to continue living. That's a scary thought, in and of itself.