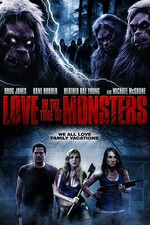 What happens when you throw a rabid zombie virus as a cliched rom-com? Most of the time, crap. This time? Nearly perfection.

We start off with an over-the-top flashback, but it doesn't bog down the experience too much. Then we get into the meat of the real story. We see a pair of sisters each in their own love issue. One of the sisters has a fiance who, shortly after they arrive, contracts said zombie virus. The other sister has been so removed from love, even her relationship with her sister is extremely strained.

Not only do they leave the Russian Uncle Sam's tourist trap different people because of the rabid mutant zombies trying to ruin everyone's day, but they also leave changed because they grew inside.

If this review sounds bonkers, that's because the movie is bonkers. It's full-on nuts, but the thing is, it works. It's a campy, cheesy, low-budget mess, but the truth of it is, this is a real gem. So if you find this one in your discount movie store or some K-Mart you're not sure how it is still open, grab this guy. Heck, you can buy it at some streaming site for less than a cup of coffee and a donut. Either way, this is a film you'll want to keep around, as it would make an excellent movie to add to a marathon night or even just a fun night in during April.