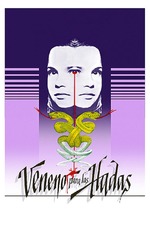 Poison for the Fairies, or Veneno para las Hadas, is well-deserving of the praise I've seen heaped onto it. Using a story of two children from very different situations to explore themes ranging from inequality to control to blackmail to revenge is a wonderful idea, and Taboada did a wonderful job executing the film.

Veneno paras las Hadas is a very slow burn. In fact, up until the last ten minutes, you might find yourself questioning whether this film really fits into the horror genre or if it's a misclassified drama. By the end of the film, you won't have any more questions in that regard.

The title and the beginnings of the film frame this as a supernatural horror, perhaps one about children getting in too deep in over their heads with forces they don't fully understand. That last bit isn't particularly out, but by the end of the film, it's clear the supernatural aspects of this film aren't all that supernatural. In fact, that probably makes things a little more frightening.

The movie isn't a horror film that's going to give you scares along the way. There are no jump scares. I don't recall any scary music. The horror all comes from the realities of this movie, most of which are realized in the final minutes.

Everything we realize in the final minutes is shown throughout the rest of the movie, but it wasn't hitting me over the head with how frightening it all was because of how mundane it feels. Orphans being made fun of and finding weird niches is common. That leading to the child being made fun of is way too common. That leading to the child acting out is even more common. Then the child gets put in a situation with a small amount of power, and that position of power happens to be over another child who fits the same profile as many making fun of her. That position of power turns into an uglier and uglier controlling force until both children are too wrapped up in the relationship to end it easily. So they end it in the worst possible fashion, which comes after the controlling child pushes her subservient 'friend' a bit too far.

The terrifying part of this film is just how relatable both children are. Neither is evil. Both are misunderstood. Most people will probably be able to relate with both children at one point or another. This is the terrifying part, as the ending climax, which I won't fully spoil, comes about so organically that it's almost met with relief or a sense of victory--until you remember that both parties in this film are children.