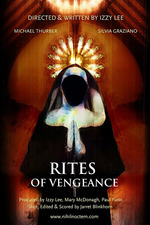 Rites of Vengeance is a dialog-free revenge short, and that's mainly what it is.

This short feels like it would be cathartic to many who may relate too well to the concept of the film. Other than that, I didn't see a lot of depth from the film. There's not a lot of extra themes going on, but I'm not sure it needs more going on. It's five minutes of cathartic revenge directed at an office that has caused many, many people pain, and sometimes, even for those who can't directly relate due to not having gone through the trauma, that cathartic revenge being released into the ether can be an enjoyable five minutes.