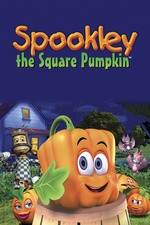 Spookley is about what you'd expect from a direct-to-video kids movie made on a relatively low budget.

It's fine. That's about the line I draw. The songs are fine. The story is fine. The animation isn't quite fine. Overall, it's fine.

The movie, in general, is about not judging people based on their appearances or other shallow reasons. That's a fine moral, and I don't really have any problems with kids' movies having a clearly defined (and stated) moral.

There are some issues, however. First, they play off two characters for laughs due to the fact they are a little 'slow'. It's strange to have this movie about acceptance have two characters playing with qualities that are often played off for laughs in a damaging way to people who really may be different.

Other than that, the biggest issue is how simple it all is. Granted, that's not a bad thing for a movie for toddlers, but there are a lot of kids' shows on Disney Jr. or Nick Jr. that feel a little more complex in about a quarter of the runtime this one had.

Again, it's fine. If you're struggling to find something Halloween-related to watch with your young kids but don't want them downright terrified for hours, this is probably a fine bet.