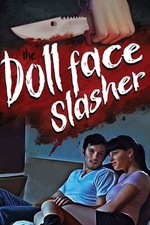 The Dollface Slasher is one of those movies you sit down with friends to laugh at, not to make you afraid.

The acting is cheesy, the writing comes off as if written by someone who hasn't actually seen a good movie, and the cinematography/editing is laughable.

Still, I can often get over some amateurish scene transitions, bad cinematography techniques, weird jump cuts, and late-night TV movie acting if the movie knows what it wants to be and executes that premise even partially well. The Dollface Slasher just doesn't.

At points, it comes off as a parody of standard slasher tropes, and the overall amateurishness of the final product would play right into that. Then the film takes a confusing turn towards seriousness and loses the playful comedy aspect seen in the first couple of minutes, which is a bit of a shame.

Even without the questionable line it crosses between serious and parody, The Dollface Slasher does nothing memorable or unique. It's not a thought-provoking twist on the slasher subgenre displayed in just under eleven minutes (without credits). It's simply a confused slasher film that takes a no-budget approach to the slashing parts of the movie.

On the plus side, this would make a wonderful appetizer for a group of friends before settling in to watch Halloween, A Nightmare on Elm Street, or some other top-tier slasher.