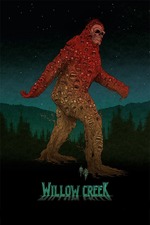 As far as found footage films go, this is one that exists.

The first two-thirds of the film certainly can't be called much of a horror film. It honestly could be some sort of indie drama focused on a quirky road trip and an all-too-real relationship. Frankly, I thought it was more than a tad boring.

The last third is where the 'magic' happens. Well, it's supposed to. There's a good chunk, which holds the majority of the scares of the movie, where the sound is all whispers intermixed with a handful of screams. This was my least favorite part of the film.

Where I think the film is strongest is the very final scene. It doesn't do anything particularly frightening; we don't even see the main focus of the movie. No, the movie introduces a bit of lore, a bit of incredibly interesting information which is barely a callback. Regardless, the resulting Google searches after the movie was over were almost, if not more, interesting than the movie itself.

While so far, this has seemed like a rather damning review, it really isn't nearly as bad as it seems. Sure, the film falls into the same traps so many found footage films do, in that it's boring until the climax and the action afterward just doesn't make up for the first two thirds, but it's also not nearly as bad as some of the found footage movies I've seen. It's also not campy in the slightest. It's all rather just mediocre.