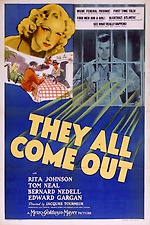 They All Come Out

Tourneur took a job making a one-reel doc about federal prisons for MGM and turned it into a surprisingly entertaining feature length B-movie about prison reform. Truly a GOAT from the get-go.

Interesting for that reason as well as the slight glimpse it provides into the history of American prison reform. The film's optimism is laughable from a modern perspective, but characteristic of the New Deal-era, especially at relatively progressive-minded MGM. Could be interesting to compare to the "Warden Duffy" movies that came out 15 years later (once I see them, that is) and other early American prison dramas.

The soundtrack on the 16mm print was a bit warbled, but otherwise flawless.

Way of a Gaucho

The Giant of Marathon