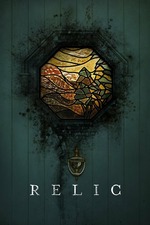 the first two halves of this were formulaic and relied too heavily on horror tropes. it honestly felt like i was watching literally any other supernatural horror flick at some points. there were lots of loud noises as jump scares, a mysterious incident with the neighbor, etc. additionally, for a film claiming to be centered around family dynamics, this one does a poor job of fleshing out the characters (i didn’t even know their names til halfway through the film). the only merit i could give the first two acts was the amazing depiction of dementia — my god, how gripping. it was a different kind of horror altogether

the third act felt like a completely different piece altogether. it was as if the director suddenly remembered that this was supposed to be a scary movie so she dialed it all the way to a hundred in a matter of seconds (in that sense, it actually reminded me of hereditary or requiem for a dream). movies rarely get the claustrophobic atmosphere right but this one executed it flawlessly; i had to consciously remind myself to breathe because the tension they’ve created was too convincing. by the end of it, i was left with a general feeling of discomfort which i take as a good sign

in general, the scares and horror aspect were fantastic. i absolutely adore the CGI and practical effects as well. the actual flow of the story, however, was pretty underwhelming. it wasn’t bad per se, but it wasn’t anything groundbreaking either