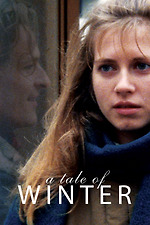 17th Eric Rohmer (after Pauline at the Beach, My Night at Maud’s, Full Moon in Paris, Perceval le Gallois, The Aviator’s Wife, My Boyfriend’s Girlfriend, The Green Ray, A Good Marriage, A Tale of Springtime, Four Adventures of Renette and Mirabelle, Love in the Afternoon, Rendezvous in Paris, The Marquise of O, The Kreutzer Sonata, Bérénice and La Collectioneuse)

Watched with my housemate James, who it’s fair to say dislikes Rohmer and his use of form. Our watch, then, became something of a running commentary/intellectual battle between us as to the relative merits of Eric Rohmer’s cinema and whether he’s a moral coward. Hire us for the Blu-Ray commentary, Criterion, even if I began yawning and losing my train of thought by the end of play.

At the end of the day, A Winter’s Tale is not the best witness for the defence, because it displays many of Rohmer’s less desirable qualities in one place. His hands-off approach to morality has its advantages and disadvantages; while it does treat the viewer with a level of intellectual respect that a great number of lesser filmmakers allow, his later films lack the more explicit sense of irony that I enjoy in his works. As my friend rightly observed, it can be easy to accuse Rohmer of indulging in these late period characters' less than pleasant behaviour. Félicie may legitimately be entirely unsure of what she wants in the two men she sees, but the way she expresses that vacillation is extremely self serving and quite cruel to Loic and Maxence; her dialogue is littered with half-truths and conceited justifications of her actions.

Yet this interpretation is heavily inflected by my own life experience and interacting with people that have behaved in such a manner. The Wikipedia article on this has a far more charitable interpretation of Félicie's behaviour, and yet both are equally applicable. So who is at fault here, if anyone? Most likely no-one, as Rohmer intends, but I still find fault with that on an emotional level, if nothing because I need that guidance to help me structure my views. Still, even with these concerns, it's still a completely gorgeous film, visually. Rohmer returns to his usual haunts of lovely summery seasides and the bustling, if rather grey, Parisian metropolis. Set around Christmas, the lovely details of various displays are picked out by Rohmer's closeups, too. Not one of Rohmer's best, but hey, he's a fave. No one makes rambling conversations look as good as him

Eric Rohmer in Order:
1. Full Moon in Paris
2. Pauline at the Beach
3. My Boyfriend’s Girlfriend
4. Perceval Le Gallois
5. The Green Ray
6. The Marquise of O
7. The Aviator’s Wife
8. A Tale of Springtime
9. Four Adventures of Reinette and Mirabelle
10. My Night at Maud’s
11. A Winter’s Tale
12. Love in the Afternoon
13. Rendezvous in Paris
14. La Collectionneuse
15. A Good Marriage
16. Bérénice
17. The Kreutzer Sonata