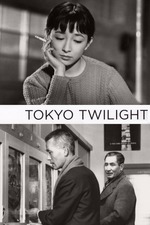 Ozu's still frames—always rigorous, rarely straying from their simplistic set ups—achieve a different effect here than they do in the previous works of his which I have seen. Rather than having a relaxing, calming, almost enervating tone, Tokyo Twilight is instead imbued with a sense of stress and unease almost right from the get-go. There's something immediately amiss with the family that we are getting to know, and in possibly the most plot-driven film of his career, pieces are slowly revealed which expose these secrets and lies which are meant to hold things together but ultimately cause everything to fall apart.

The examination of Japanese culture and society has always been at the forefront of Ozu's work, but here it's missing the cheeriness and pleasantness that tends to soften such pointed critique, and that makes the events which unfold all the more devastating. Regardless of Ozu's intentions, Takako's final monologue to her father is especially damning, essentially prescribing to a doomed existence within the constraints of her society. The lack of resolution is only a continued extension of how none of these people feel like they can speak honestly with each other. No matter their place in life, be it old or young, married or single, there seems to be no proper outlet to escape to, no means of finding any sort of hope. To speak of it in literal terms, the architecture and framing constantly depicts these characters being trapped within their surroundings, and both the weather and darker lighting keep the film at a despairing mood.

Despite the gloomy vibe, the film has a (relatively) elevated energy and pace which frankly took me by surprise. Part of it is certainly related to the amount of plot that it has to move through, but it was also exciting to see Ozu explore a variety of non-domestic and peripheral settings (the French bar, the Mahjong parlour, the police station, the OBGYN clinic). It is in these places where we can properly get to know these characters, and better understand the societal hindrances placed upon them. It is in these places where these characters seek the solutions to their problems and try to find some sort of connection (or lack thereof). Even the more traditional and familiar shots and locations take on a more interesting dynamic here, with Ozu shifting our perceptions of what we have come to expect within the overall body of his work. One specific example is a simple two shot of Akiko and Kenji, one whose composition immediately recalls an iconic shot in Tokyo Story. But while the latter shot exhibits a sense of partnership and dependence, the former takes on a darker tone framed within the context of its narrative, and the way Ozu continues to hold on the shot after Kenji has left the frame only further confirms Akiko's sense of total abandonment.

Ineko Arima's performance as Akiko is the heart and soul of the film, for better and for worse. Her air of petulance only a molded mask for the deep sense of sadness which permeates her character, as each and every one of her relationships unfolds with a stomach-churning sense of discomfort. Ozu veterans Setsuko Hara and Chishu Ryu contribute with steady and reliable performances, but it is Arima who sets the pendulum swinging, anchoring both the narrative and thematic cores as well as impacting the decisions and mindsets of the other characters. The inability to reconcile her family's troubling history with her present issues is especially heartbreaking, as if you can literally envision the past traumas weighing down on her shoulders, and combined with the stern conservative community she inhabits leaves here with nowhere to turn.

Ultimately a large part of what makes Tokyo Twilight so successful is that it manages to make nearly every relevant character sympathetic to a certain extent. Of course many of them have made mistakes, but above all they are affected by circumstances (cultural, social, economic, historical) which are simply out of their control. In some ways that makes the revelation of events throughout the film even more depressing, because in no way is there any direction made towards the occurrence of potential change. Instead, people are resigned to live within these man-made walls, both literal and metaphorical, and are indeed resigned to die within them as well.

The Earrings of Madame de...