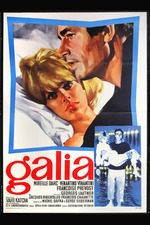 Disclaimer: I do not claim to have ownership over or to have written the following review. This review was written by Roger Ebert, where the official online posting of which is linked above

Georges Lautner's "Galia" opens and closes with arty shots of the ocean, mother of us all, but in between it's pretty clear that what is washing ashore is the French New Wave.

Ever since the memorable "Breathless" (1960) and "Jules and Jim," and the less memorable "La Verite," we have been treated to a parade of young French girls running gaily toward the camera in slow motion, their hair waving in the wind in just such a way that we know immediately they are liberated, carefree, jolly and doomed.

Poor Galia is another. Played by the passingly attractive Mireille Darc, she comes to Paris from the provinces, becomes a window dresser, joins a Bohemian crowd and lives, naturally, in a penthouse apartment on the Left Bank.

It might have been interesting to learn how Galia pays the rent on her salary but, alas, Lautner has a more significant plot for us. Galia rescues a would-be suicide from the Seine, takes her home and cares for her, and discovers that the hapless woman is unloved by her husband.

But all good things have an end, and the last section of the film is given over to psychological hanky-panky a la Hitchcock. The abandoned wife, declared legally dead, gives Galia an opportunity to push her back into the river. But Galia cannot and the wife, in gratitude, murders her husband to save Galia from his beastliness. It all goes to show you.