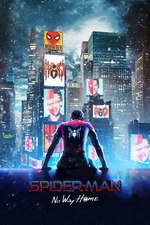 After the credits rolled, someone yelled “Just take all my money now” and I honestly felt awful. This was REALLY bad. Like astoundingly bad. And because Marvel knows they got us hooked, they aren’t even trying anymore. I’ve said it before, I know. But guys, this can’t help but feel like a nadir.

Marvel Studios achieved transcendence by finding a way to put several characters in one film without it feeling overstuffed and giving each character their moment. No Way Home does not accomplish this. Each character is almost unrecognizable from the original universe they are pulled from. Each entrance was stale and disappointing. They hinged this entire movie on a big moment that fell so flat that everyone in the theatre was dead quiet during it. As if to say, “Wait. This is how they are doing it?”

I get that Marvel movies are graded on a curve. The draw of them in itself is something to marvel 😔. The way the studio has crafted this never-ending, gigantic universe can at times feel like an act of God Almighty himself. But this God is a cruel god. A god that does not respect his worshippers and devotees.

I think the most frustrating part of this movie is how you have all these great characters from different movies and you use them by having them all talk to each other in single shots. Who is the culprit here? Covid restrictions preventing actors from being close? The insane amount of scheduling that had to be done to pull all these actors together? Or perhaps a lazy idea that went no further than the expectation that fanboys would cream their pants as they whisper to their partner’s ear “That’s Electro!”? Perhaps all of these are to blame, nonetheless I blame Kevin Feige.

Over at Puck (a wonderful newsletter by industry insider Matthew Beloni), Beloni has wondered if a Marvel fatigue is around the corner. I believe, at least on the creative side, it’s here. This wasn’t Spider-Man’s move. This was an agenda sprinkled with some teenage anxiety and enough Zendaya/Holland to give the semblance of plot. But this movie was a trailer for other movies. For what’s next.

It’s tonally unsure. It’s pacing is fucking insane. It’s shot weirder and more detached than any Marvel movie I’ve seen lately. I won’t be giving this movie credit for its team ups. That’s bullshit. If a movie should be praised alone for its mash ups, then Smokin’ Aces is Citizen Kane. (The IMDB on that movie will blow your mind).

Chris McKenna and Erik Sommers are very good writers. Jon Watts is a very good filmmaker. But Marvel was not interested in giving them the room to actually make their own movie.

And at the end of each of these reviews, I only have myself to point fingers at. Why do I keep going? Am I any different than the man who screamed at the end?Perhaps, I also fear the same god he does.