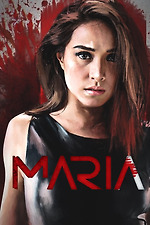 The most seo-unfriendly film title since 2.0, Maria is the third female-led action flick from a country with a small movie industry released over the last year, along with BuyBust and Furie. And, hey, they've all been pretty good. Not great, but pretty good. Cristine Reyes plays a nebulously-defined former badass whose calm family life is disrupted when her past catches up with her.

There is a lot of action, and Reyes does most of it herself, but the fight scenes aren't always filmed competently. Some nice, unshowy tracking shots show that the filmmakers knew what they were doing, but too often they shot the fight scenes way too close to make it clear what was going on. This was my biggest problem with the movie, but not the only one, as the script featured a lot of bad dialogue and nonsensical motivations and dangling threads left unresolved.

But it's an action movie, no one should care too much about the script. The action was good enough frequently enough to keep me happy, and the filmmakers showed a willingness on occasion to go for extremes in depiction of violence that put a nice edge on the whole thing.