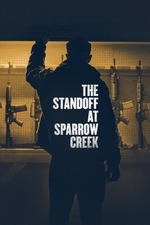 File this one in the center-right, operatic crime drama folder that is inhabited by the likes of S. Craig Zahler. There is something so interesting about the way it exploits the darkest, most shameful contingents of humanity in a way that also injects a little something that I can't quite classify as hope.

It is innately terrifying to imagine that there are men out there who congregate outside of the law because they find themselves afraid of its reach. Through various, poor decisions they have made, all roads lead to seven men operating out of a lumber warehouse as a nebulous "militia", whose party stance is left unclear throughout the course of the film, even as some members make clear how exactly they feel about a funeral full of cops getting shot up.

There's a two-way road of irony paved through Henry Dunham's debut, in that if you ask any of these militia men what their relationship between them and their country is, they might describe it as "patriotism". Except, how can a neo-Nazi be a patriot, in the land of free? How can a man who impedes righteous justice for innocent life lost be considered a man of the people? How can you stand critical of your government, something that is very patriotic, whilst breaking many of its core foundations? On the flip side, this unlawfulness is something that is only fostered by the second amendment. Government, local and federal, has been responsible for some of the most heinous acts our country endures on a daily basis, yet, so are the people. Who wins in this endless tug of war?

That is the core of The Standoff At Sparrow Creek as I see it, and I love this kind of examination of men (it's always men) on the edge, who feel so outcast by no one in particular that they are quick to take credit for an atrocity they didn't even commit. It's dark, dark, unhappy shit, but one of my favorite narrative devices is a villain you can understand. Here, you get to spend 90, deliciously lit minutes with the lot of them. James Badge Dale's performance as an ex-cop grilling these mates is some of the best work he's ever done, and everyone else goes toe-to-toe with him. Though, you do get the sense that Dunham feels he could write a novel about this particular topic as there is a lot of languorous posturing from the characters that you could probably find verbatim on a quarantined subreddit, but perhaps that is the point. These kinds of people can lack self-awareness, and none of it is played for irony or laughs. That's a bit why it's so unsettling.

There is a whole thing at the end that lets the air out of it, and that kind of makes it more palatable, but you can't help but feel little betrayed as it's unfolding. However, the more I think about it, and where it leaves the character of Gannon at the end, I kind of like it. That's why I can't say what's injected is strictly a dose of hope. It's more like....trepidation.