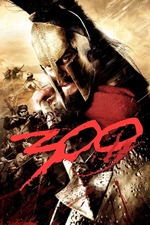 While based on a comic, the comic is based on the historical Battle of Thermopylae of 480BC. The battle holds a special place in my heart because David Gemmell used it as the basis for some of the battles in his books. From the moment I heard about the movie I was looking forward to it – and I wasn’t disappointed. As a cinema going experience, it was superb. As a deep character movie with an intricate plot, it failed, but I never believe it was intended to aim at that target.

The imagery was excellent, the action, pace and direction suit the material and give the whole movie an otherworldly appearance. The characters are easily accessible (which is necessary because of the short time to get to know them) and the dialogue clips along and keeps you interested. A movie about a single battle is never going to have much scope for a complex plot but 300 does well with it’s scope and offers a little bit of politics and intrigue to grease the wheels of action.

And it’s the action that drives this movie, the solid unrelenting nature of the Spartans, their charismatic king and their desire to die the glorious death. The cast is good, we get a range of warriors and characters to enjoy, and we get to see some of the best large scale battle scenes in cinema history, without losing any of the personality of the warriors in them. 300 is an excellent action movie, tense battle scenes, interesting characters, and superb visuals.