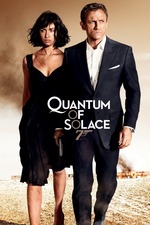 I liked Casino Royale although I thought structurally it had issues. I thought the new look for the Bond franchise was beyond necessary, it needed to step away from the cliché and it did that very successfully. As a result, I was looking forward to QoS and I was a little concerned when I read a couple of negative reviews. The first said that it crams too much action into a short space without time to breath and the second that there’s so much double crossing going on you have no idea where anyone stands.

Well let me tell you, if you’re a fan of action movies, spy based action movies, Bond, or just thrilling cinema, then you’ll probably enjoy Quantum. It’s not perfect, but it gets the pace much better than Royale did, and it’s no-where near as complex. A big issue I had with Royale was the need for so much exposition at the end to explain what had happened. Quantum avoids that, it’s more contained and you’re left to draw your own conclusions about anything they don’t simply tell you which is a much more mature approach.

Quantum picks up immediately where Royale left off and the British Secret Service begins the journey of understanding the new organisation they have discovered. There are surprises and twists at pretty much every stage although they’re not overwhelming. The action does kick off right from the outset and the pace is solid, but there are moments to reflect and catch your breath. Craig is superb as Bond once again, and the two main female characters are well played. I won’t spoil the female leads, but will just say that they both bring something completely different to the story.

I had some minor quibbles with the plot (which I won’t spoil) but they’re truly small issues. I liked the ‘Bond-lite’ approach, there’s no discussion of gadgets and the one or two used are really small elements, there’s no huge organisation supporting Bond where-ever he goes. For a lot of the movie he’s on his own, for the usual reasons (he’s rebelling, it’s in his nature).

The only real complaint I have about the content apart from the minor plot issues, is that the bad guy packs no punch. Okay, so the organisation he’s in is huge and scary and in control of the entire universe, but the guy himself just poses no threat in my mind’s eye. He needed a steel rimmed hat or something, maybe steel teeth.

I do have another complaint about the direction for the action sequences, and that is that I didn’t enjoy the style. The chase sequences are made up of super-fast cuts, super-shaky shots and usually cut against a backdrop of some other activity (horse race, opera). It’s just a little too quick for me, I would have preferred more tight-camera work and steadier, longer shots. It does however give you a huge sense of danger and pace, it’s just not my style.

Even with those last two issues, Quantum of Solace was an excellent movie experience, and as I said, if you’re a fan of the genre or Bond you’ll probably enjoy this a great deal. For people who’ve never seen either, it’s a pretty good introduction (although without seeing Royale it won’t make as much sense).