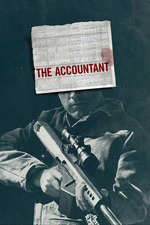 The Accountant is about 4 films rolled into one. Often confused, continually clichéd, and oddly paced, it's another Ben Affleck flick that'll look lukewarm on his CV.

He can play action - he just never seems to get the script.

Anyway, the action sequences are interesting, Anna Kendrick does really well considering the slim role, and I quite enjoyed Ben's character.

I don't think the clichéd depiction of autism will be remembered with any warmth.

With all that said, I would have happily given it 3.5 stars because it was mostly engaging - except we're forced to ignore some stuff in the final moments that I'm not prepared to accept.

We're forced to accept that the main bad guy, who we assume our hero will face off against, and who is pretty detestable, isn't going to be dealt with, and I wasn't okay with that.