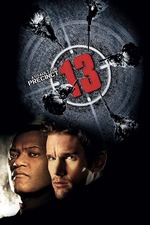 A remake of John Carpenter's original, the film follows cop Jake Roenick (Ethan Hawke) as he is forced to protect a notorious criminal named Marion Bishop (Laurence Fishburne) and others when masked assailants lay siege to their precinct.

Despite its flaws, this is a lean and gritty action thriller. It is slow in places and telegraphs its plot twists too heavily but there is still a very compelling story here. Jake is a well written protagonist and his arc is handled well. A sudden second act death has a big impact of his arc and is very effective His dynamic with Bishop is also great and the film does a decent job of having the two opposing characters rely of each other. The ending is very rushed but is a solid and satisfying conclusion to the story.

The film has some clever action sequences like the SWAT break in scene. Cinematographer Robert Gantz and director Jean-François Richet do a great job of building tension.

Final thought: It is flawed but I had fun with this action thriller. Will review the original tomorrow.