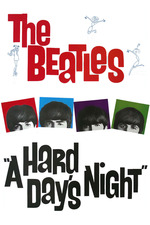 A versatile movie not to be taken seriously. The revolutionary group was out there causing a brutal female fanaticism a la Buster Keaton (Seven Chances, anybody? That guy was a genius). This is the equivalent to any piece of garbage released nowadays for the sole purpose of increasing the popularity of pop/Disney teenage mutant monsters. However, this is different because of what The Beatles represented in the music industry, the sharp screenplay and its witty comedy. Those four guys can actually pull off some gags really good.

And yet, I'm put in the necessity of separating objectively my opinion towards The Beatles and the art of filmmaking, and this is far from a masterpiece, but I want to highlight my favorite scene: Ringo with the "deserter" boy.