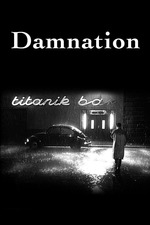 The unparalleled direction style that characterized the graphic poetry and cinematographic mastery of the acclaimed Hungarian director Béla Tarr is seen for the first time in his ambitious and emotionally cathartic magnum opus Kárhozat, better known by its English title "Damnation". The first impression this masterpiece may give is that it stands for an existentialist representation that successfully accomplishes to mirror life itself. Perhaps it is, but it is also a reflection on the futility of materialism, the emotional escapism that religion may represent for some people, the importance of establishing priorities, the influence of external acquaintances and a direct slap to the cheek of the irresponsible man. With a landmark style of filmmaking directly inspired by the magnificence of Andrei Tarkovsky and the vision of Theodoros Angelopoulos, Kárhozat is undoubtedly one of the best dramas of the decade.

A rainy, dark, depressing and muddy environment is the one that surrounds the main character Karrer, a man who has led an unsuccessful emotional relationship because of erroneous decisions. His existence would be utterly doomed if it weren't because of the existence of a place called "Titanik Bar". In there, a hauntingly beautiful singer performs every night. However, she is married, a detail that will cause Karrer to be determined to keep her husband away. With religious reflections and cathartic epiphanies, the main character will suffer a huge transition and his actions will unleash an unprecedented set of events. In 1988, the film won an European Film Award for Best Young Film. Fifteen years later, Béla Tarr received a France Culture Award for Foreign Cineaste of the Year at the Cannes Film Festival.

The world of Béla Tarr is unforgiving, realistic and ordinary. Despite it being dark, depressing and rainy (like in basically the rest of his films), it is filmed with extraordinary aesthetic balance and cinematographic gorgeous awe. The characters share the same psychological characteristics. First and foremost, they are vivid incarnations of the daily living: confused, bored, imperfect, sinful, ambitious, surprised. A stunning use of black-and-white cinematography and hypnotizing, unusually prolonged takes emphasize their strictly human condition. The director has the magical capacity of creating an atmospheric mood of realism. It is this faithfulness towards life itself the one that destroys any possibility of the audiences' boredom, and the one that assigns certain degree of interest, uniqueness and relevance to the world depicted through a dreamlike, sometimes nightmarish scope.

Just like any member of a society plays a certain role inside of a whole, each element, each drop of rain, each seemingly insignificant physical object inside the conventional sets and filming locations, has a particular meaning. They are just there for satisfying the eye, but all of them have a very characteristic uniqueness. The characters have the exact same function, just like in real life. Each living and inert entity is sharing a message, sometimes screaming it. A breathtakingly precise camera work follows the several events of the characters, mirrors their internal psychology and reveals their most inner thoughts. With the remarkable aid of a wonderfully developed screenplay that contains several religious references, Kárhozat builds an impactful catharsis through the depth of the poetical dialogues, dialogues that assure that the path the main character is taking leads to ultimate nothingness. The pursuit of happiness is always expecting us to start it; what really matters are the means and the motivations behind it.

Kárhozat contains Tarr's cinematic signature and began the collaboration between him and the writer László Krasznahorkai. The intention of the film was its intrinsic naturalness through a strikingly effective lightning that transforms the people into wandering ghosts of reality in search of a meaningful existence. The anticipation of personal plans and ambitions have always a drastically different outcome, a fact that is shockingly mirrored in what may arguably be the most awkward and least passionate sex scene ever filmed, irradiating the emptiness of Karrer and offering a brief glimpse so it can be used as an introduction for the imminent emotional destruction of the town. The inescapable, internal doom of the protagonist is shown in the most despicable, degrading, and yet accessible form when he starts to crawl barking to a dog and feeling triumphant after his victory against an animal. The conclusion is: we are animals also, only slightly more rational. Tarr is as impactful as an emotional bullet, and whereas his two absolute masterpieces Sátántangó (1994) and Werckmeister Harmóniák (2000) relied more on visual transcendentalism and philosophical material of surreal imagery and their influences on modern society, this grandiose little baby was starting to mature, becoming a masterpiece for the past century and a landmark piece of cinema. It is cinema of sounds, images, music and facial expressions... nothing more...