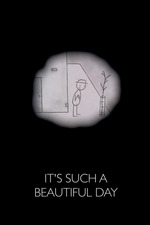 Sometimes, all that you need is to be a demented bastard so you can write, narrate, direct, edit and conceive such complex, mindblowing and heart-racing reflections on life with the simplest plot elements, yet with a remarkable attention to detail that just Hertzfeldt, me and few others in the planet seem to have. We belong to a rare breed, and that is why we can see so much passion and authenticity in every single frame. While we laugh, we also say: "Dude, that's so true. And I thought I was the only one I saw life that way."

In the intermediate chapter, Hertzfeldt is extending the bases of rational thought with the elements and premise established in the first chapter. That is why this segment, besides being longer, is more symbolic and carries heavier ideas and imagery (heavier in substance AND in meaning). Technical aspects now play a significantly important role, the jaw-dropping pace and the narration style are kept intact and, in the end, it concludes exactly what we wanted to hear and know all along with extremely meaningful reflections.

The metaphysical reflections of Hertzfeldt's second chapter in his increasingly impressionistic stream of consciousness had been enough warning for the type of closure he would think for the life of Bill, a mere contemplative collage of juxtaposed dreams, memories, longings and invented past events with the purpose of transcending his own existence as the attention to detail is exponentialized to a cathartic degree of marvel. The increasing blending of live-action and animation is a metaphor for Bill's coming to terms with his past, present and future existence while he starts noticing and reflects on the minor and greater details of life until reaching fantasies that are sheltered in the infinite.

A masterful closure, entirely dramatic, serves the purpose of an invitation for the audience for appreciating life like Hertzfeldt and I do, since he is the artist whose vision towards life and existence most closely resembles mine. It's a wonderful experience to find a twin soul in life's appreciation, as this testament, attempting to reach immortality, has imprinted on the bewildered eyes, mind and heart of the beholder.

You could see this as the best film of 2012, or a magnificent effort of five years in the making. I prefer looking at it as three of the best shorts of their respective years. However, I'm adding this to my top list of 2012 simply because there is a serious need of that year to find a 5-star film, and here it is, a testament that shows that Hertzfeldt finds the greatest of inspirations putting together slices of life instead of creating one feature-length story. That is why this feature was unintended. Hertzfeldt kept working on it with no rush, waiting for things in his life to happen and shaped them in their proper, respective times. A trilogy came out and it turned out that it had the characteristics of a full feature. It was better that way. We all prefer it that way.