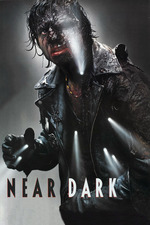 -Ever wondered why the film seems kind of ordinary but still the overall feeling you're left off with is that of having seen a darkly poetic movie?
A: The answer is in the opening credits.

Seriously. If you were an intelligent person, you would hire the best krautrock/experimental electronic music band to soundtrack your movie and you instantly raise it to another level. Didn't anybody witness the results in Risky Business (1983), Firestarter (1984), The Keep (1983) or Legend (1985)? By mere causality, the film becomes better.

-Ever wondered why the ensemble cast resembles that of Aliens (1986) so much?
A: It was a suggestion by future (and brief... heh) spouse James Cameron. You will also easily notice an Aliens easter egg hanging around. There was a romance thing going around, definitely.

-Ever wondered why you called this film good but it wasn't because of its campiness, because there really wasn't any?
A: It's a common symptom. You cannot really pinpoint what made it so good. It's definitely a standout in the genre. The word "vampire" is never uttered. Beyond the poetry created by the presence of Tangerine Dream alone, the film has wonderful cinematography, excellent characters, a family that you can relate to, a struggle that you almost perceive as palpable in the protagonist and a show stolen by the awesome Bill Paxton. Even if this was the first film directed by Bigelow alone, proving for the first time evidence that she has as much testosterone in her camera as the average male filmmaker, her feminine side allowed the film to carry an emotional context that most men could have easily lost. 90% of the time I see a movie directed by a woman I hugely perceive this difference, so by no means I'm making a stereotypical generalization of gender. One of my biggest concerns was to have the family during the first minutes as useless background, but somehow tables are turned and they did become very relevant halfway through the film. Ergo, the ending was very good and unexpected, too.

The film comes very recommended from the most objective viewpoint possible. Do not confuse it with another horror film of the 80s, the decade of atmospheric campiness and wonderfully absurd creativity and gore in the horror department. This is a serious movie and a rollercoaster ride of a mixture between horror, thriller, action, drama, fantasy and romance. Ignore the 86-minutes cut version because I cannot imagine anything being chopped off.

This is Bigelow's best film.