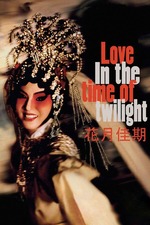 tsui hark's strange experimentation with cgi might have come to its fruition in this magical film. while american cgi is typically praised it reaches some semblance of verisimilitude (e.g. jurassic park), tsui's cgi revels in artificiality in order to create striking fantastical images. in this respect one could compare tsui's approach to, say, the matte paintings in hitchcock's marnie, but that would be somewhat inaccurate because cgi for tsui, certainly in this film, is a matter of elevating emotion rather than hitchcock's distanciation. in other words, tsui hark is firmly self-aware of cgi's inherent spectacle and seems to embrace it with sincerity whether for humorous purposes (kong's facial contortions and hovering punctuation) or the stuff of nightmares (the lampost purgatory littered with hazy obelisks and scattered anatomy).