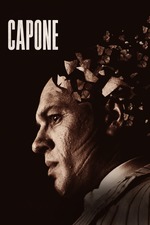 Clinical experimentation, which is what I should have expected from Trank — a filmmaker clearly not being given enough credit — at this point, but it caught me off guard nonetheless. The comparisons to Gotti (of which this is essentially an opposite), et cetera, simply had me prepared for an entirely different, and altogether much more by-the-books experience. I was not expecting a bizarro, fractured, absurd, genuinely terrifying, purposefully off-putting and deeply, deeply sad study of a haunted psyche.

Capone almost — and emphasis on the almost — plays like a feature length adaptation of the very finale of The Irishman, directed by Mike Flanagan in Haunting of Hill House mode. There’s an extended sequence in the middle of the film which shows a man walking, quite literally, through the horror of his memories; memories we’re not even sure are real, half-real, or something else entirely. It’s one of the best sequences that I’ve seen all year, in any film.

I shouldn’t have been, but I was just as ready as anyone else to write this off as another unnecessary entry into the gangster genre. It’s simply too fascinating, and frankly too strange to write off in any way, shape or form. Next to The Irishman, it has to be my favorite addition to said genre in years, though it barely qualifies. It’s not a mob film; it’s a portrait of a blend of broken nostalgia and mental degeneration, transforming a terrible man into a helpless victim of the brain’s capacity for decay.

Many will hate this dreamscape, and understandably so, as it’s not only greatly uncomfortable but — and I don’t mean this hyperbolically — bordering on the avant-garde. When a film’s most violent moments are among its least frightening, you know you’re onto something special.