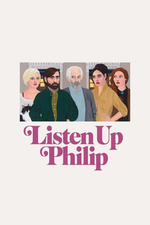 I apologize for the recent briefness of my reviews, as things have been very hectic with the coming of the end of the semester and all, but I feel I have to drop at least a paragraph on Listen Up Philip to properly express how much I enjoyed this film. From it's unlikable yet slightly lovable characters to its playful critique of the literary world and its inhabitants, almost, almost reaching the heights of a highly effective and hysterical self-parody, yet I'm not entirely sure that's verbalizing it correctly. Either way, the laughs are there... but I wasn't expecting this film to deliver the goods on the dramatic side of things as well as it did, particularly some of the sequences involving Elisabeth Moss' character, Ashley. It's Jason Schwartzman though, who delivers his best, most nuanced and realized performance since the late 90s (Rushmore), embodying an anti-heroic spirit that mixes harsh truths with bittersweet hilarity. He'll end up on my year-end list of favorite performances, without a doubt. This was my first experience with the films of Alex Ross Perry, but it most certainly won't be the last, as I can't wait to check out The Color Wheel. I love this guy's writing... no, I just love this guy. I mean, look at his IMDb photograph, for christ's sake:
www.imdb.com/name/nm3504405/