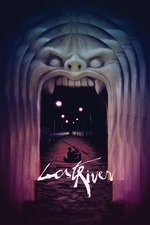 Literal and metaphorical underworlds run parallel in this abstract work of expressionist cinema, as you follow the poverty and downward spiral of a single mother and her eldest son struggling to maintain payments for their home in a disintegrating American town.

But Lost River, being an expressionist film, isn't really about the story so much as its about capturing the emotions and experiences of the characters through sensory details, utilization of vibrant colors and a strong, tense atmosphere; it's an audio-visual experience in the same vein, aesthetically, as films like Harmony Korine's Spring Breakers and Nicolas Winding Refn's Only God Forgives.

Of course, Benoit Debie shot both this and Spring Breakers so it would make sense why there would be some visual overlap (seeing as Debie is one of the few working cinematographers who I would describe as a non-directorial auteur). Aside from being a display of cinematographic and compositional brilliance, Lost River marks the emergence of a new director with a style that I can get behind.

With an incredible score, fierce neon hues, surreal macabre theater, a pair of outlandish antagonists and a darkly magical use of allegory, I can safely deem Lost River unfairly maligned.

PS: character MVP, for me,
goes to Rat (Saoirse Ronan).