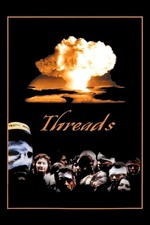 I know for a fact that I will never watch this again, as it's probably the single most harrowing film I've ever seen. Beyond Come and See, beyond Salo, beyond Irreversible... more along the lines of how much Zero Day fucked me up because both subject matters are personally relevant; they're events that I fear, that could possibly - but god, I hope not - tie into my own life. Threads might be the first film I've watched that I wish the filmmakers wouldn't have checked their facts and gotten them right. But seeing as it played out in the same vein as Peter Watkin's 1965 masterpiece of a short film, The War Game (which based its plot progression on actual emergency government plans), I had a feeling that Threads was probably crafted along similar lines. The cinematography and production design are some of the bleakest, emptiest representations of death out there. The film practically reeks of decaying flesh. For the first forty-five minutes to an hour, you're sitting there in anticipation of the imminent fate that you know is to come, but when it finally hits, it's something that nothing in the deepest abyss of your mind could have prepared you for. It goes beyond graphic; it stabs you right in the fucking chest and twists the blade, only to withdraw the knife and stab and twist some more. Toward the end of the film, I thought that the message might be moving in the direction of something along the lines of "life goes on," but then the final scene came and I realized that I was approaching the idea backwards. What Threads is saying is just the opposite; life doesn't go on. Life seizes on the floor, foams at the mouth and withers away. The darkest, scariest, hollowest and most mortifying cinematic experience that I think I have ever had.