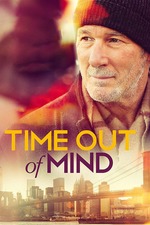 The kind of film that I would recommend to fans of films like Wendy and Lucy (though I personally don't think that this film is as strong as any of Reichardt's films), the kind of film I'd recommend to fans of heavily minimalist, sociological realism. If I knew that it was going to move at a snail's pace, I would have prepared myself better, because I did find myself almost drifting off at certain points in the film... but nonetheless, it's an interesting commentary on post-9/11 America, the system that dictates the rights of the homeless, and father-child relationships & responsibilities. It's driven by a pretty great performance from Richard Gere and I did like the very ending.

Edit: You really might like Time Out of Mind; the thing is, I love the director's work. The Messenger was amazing... but if you've ever been to a film festival, you know how you get really tired about half way through the stretch? I was sooo tired... running on coffee, when I saw Time Out of Mind so I wasn't in the Right Frame of Mind, haha. It's just a LOT slower than most of Richard Gere's other roles. Possibly his most subtle performance, definitely his most minimalistic, but I just wasn't prepared for the pacing. I love slow pacing, but not when I'm exhausted, so I'm definitely going to need to re-watch it... as I mentioned, the script was good and there's some fantastic post 9-11 commentary involved in the screenplay/the general framework of the direction. You may love it. I may like it more upon viewing it agaaain! (: