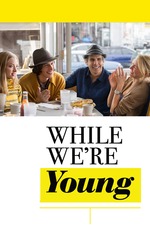 I'm assuming that this isn't going to be one of my more popular reviews, because the opinion that I am about to express doesn't seem to be a very widely held one (seeing as Frances Ha is a pretty well loved film) but I almost feel as if While We're Young and Frances Ha need to be compared - or better yet, contrasted - because looking at the films side by side is like doing a brief longitudinal study of Baumbach and seeing how he is growing as a director, making more concrete decisions and presenting rounder, more complex characters with greater self-confidence in his writing.

It came as a surprise how much I ended up loving While We're Young because of the negative experience I had with Frances Ha. I almost wasn't going to write anything up on this film, but after it ended, I got into a slight debate with a friend of mine on good ol' Facebook, and I think I'm just going to insert a couple of those thoughts here.

I truly thought Frances Ha was a significant step down for Baumbach, and his least realized film with regard to his representation of Frances - how he as the director viewed her, how he expected the audience to view her, and most importantly, how viewers of the film actually ended up perceiving her. Whereas here, I thought he took a very fair, balanced and (for lack of a better word) understandable approach to young adult/contemporary culture, both celebrating it and critiquing it in equal measure. In contrast to Frances Ha, I think people will actually come out of the film comprehending what Baumbach is trying to say about his characters (whereas I think the characters in Frances Ha are pretty well misunderstood by many, which is the result of uneven character portrayals, IMO).

As subjective as cinema is - and it is 100% subjective - I must (frustratedly) maintain that I think Frances is a deeply misinterpreted character... and not in a good way. I don't despise the film, and I understand rather well that once a film enters the mind of a viewer, they're totally free to perceive it how they will and think what they think, but that doesn't change the fact that I believe a lot of fans of the film did not understand what Baumbach's vision with her character was - not that that even matters, because like I said, it's only the vision of the viewer that matters in the end - but it did keep me from loving the film as much as many others do. That was not the case here.

Seeing an updated perspective from Baumbach on "hipster culture" (again, for lack of better words) does make me want to re-visit Frances Ha, and see if I come out of it with a different result than last time. After all, I've only seen it once. For now though, I do think that While Were Young is Baumbach's best film since his darkly comedic masterpiece, The Squid and The Whale.

You should catch it while it's still in theaters.