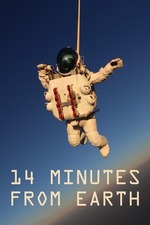 I’ve decided to review this as I watch, now I’m hoping the narrative voice in the beginning is supposed to be a mock infomercial voice trying to sell me on the wonderfulness of earth, as if it goes on longer than a small jest it’ll definitely become annoying.
As I continue to watch I am slowly beginning to realise that we are likely stuck with this narrative voice, it’s also not as exciting as you’d think in the beginning. The editing is a lot of triad and dual screens to show off the different part of the Earth which is fine.
They just used the record scratch which was fine.
It’s definitely aged, it’s diagrams and sound track are very old age, sometimes the music choices are janky.
“Why do you have to jump?” Did wrong me the way tho lady- like I get it you’d want a stranger to die over the loved one but like, yous mans worked at google and he’s old so why not? Plus he wants to... I don’t see why not
I guess that dry ice scene (???) was kinda suspenseful? I guess? I mean they tried..
I feel like this would be a lot more enjoyable if it wasn’t so narrated and if it was more interview based... yeaaah

The Simon and Garfunkel bit made me giggle