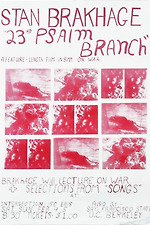 Another masterpiece from Stan Brakhage. Shit, this is the perfect investigation into war, all from archival footage and his hand painted and scratched celluloid style. He really doubles all the way down on this film. And it’s not as dense and cyclical and episodic as it’s feature counterpart Dog Star Man, but I love the emotion and intensity behind this one more honestly. Shit, I guess I need to rewatch it to compare the two fully. But I watched this while Daughter’s “You Won’t Get What You Want” played, succeeded by “The Mercy Seat” by Nick Cave and the Bad Seeds. That made for one of the best viewing experiences I’ve ever had. What a spectacular film, what a truly unique and raw film about such a terrible concept. Brakhage called himself an abstract expressionist in an interview one time, and damn is that spot on. He’s a GOAT, no two ways to look at it.