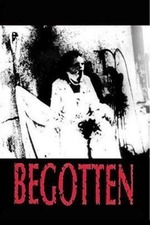 Good LORD, it has been a long time since I’ve seen this - I think it was February 2015 last time I sat through like half of this before quitting. I don’t blame myself, because I needed the half decade of more accessible movies like Eraserhead, the Kubrick stuff, and the history of silent horror films to ease me into this. And first of all, let me say that E. Elias Merhige deserves some love, because no one ever brought this film up to me in film school, and the idea of it being missed by all of those people blows my mind. I’ve sorted my thoughts out on this movie by splitting all components up into two halves (a half I like and an half I don’t like): original surrealist horror that tells the abstract story of birth and death and life and power while occasionally being extremely inspired by Stan Brakhage (like the first twenty minutes, last five, and bits and pieces throughout), and a cliche horror flick that’s played for audiences after dark to sell tickets and shock people alluding primarily to cheesy horror films and embracing this through a forced aesthetic (which is that awfully challenging forty minute stretch that starts about twenty five minutes in). Every time I see something in the latter category, I start to really disgust this movie and vice versa. That’s not to distract from the object content here though - I think the film gets hate for its subject and quality of presentation too much. This film might just have the greatest soundtrack every recorded. Does a magnificent amount without doing much, and I could look the sounds of this film for days. The imagery (especially God Killing Itself) is iconic and terrifying. The landscape shots are great. Honestly the film is pretty coherent and cohesive, minus the fatal attribute: the pacing. I mean come on, name me a worse paced film than this. It’s a very tough task to get to the finale, and even then there’s no pay off. I can respect this from a theoretical and intellectual perspective but as a form of entertainment, it’s hurts the film. It obviously wasn’t made to be rewatched past the thirty minute mark. And I was loving this movie - like best of all time loving it - and then it came to that screeching halt that made me hate it 5 years ago. There’s no doubt a lot of thought and creativity and power in technique is evident here though, and this movie has been widely influential on me as a filmmaker, and I think even with the flaws, it is a 9/10, borderline 10/10. It didn’t let me down but it didn’t exceed expectations for the rewatch. But the look and score really touched me, and you forget how rare it is to get films this individually unique.